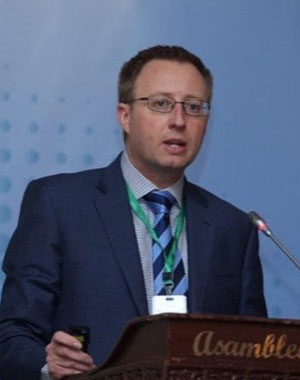 Daniel Feakes is the Chief of the Implementation Support Unit (ISU) of the Biological Weapons Convention within the United Nations Office for Disarmament Affairs in Geneva. He manages the activities of the ISU and the implementation of an EU Council Decision in support of the BWC.

He was also the Secretary-General of the Eighth BWC Review Conference in November 2016. Daniel has wide experience both in the field of multilateral disarmament and in working with international organizations. Until November 2014 he was the Strategy and Policy Adviser in the Technical Secretariat of the Organisation for the Prohibition of Chemical Weapons (OPCW) in The Hague. From 2009 to 2013 he was a Senior Policy Officer in the OPCW’s Verification Division. At the OPCW, Daniel oversaw education and outreach activities, was involved in the preparation and conduct of the Third Review Conference of the Chemical Weapons Convention and worked closely with partners in other international organizations, the scientific community and civil society. Prior to joining the OPCW in 2009, Daniel spent 12 years as a Research Fellow with the Harvard Sussex Program on Chemical and Biological Weapons where he worked on chemical and biological weapons issues and published widely on these topics.